The owner of the farm told about the business of raising animals and about the program whereby dogs are sent to rescue in the USA.

In the valley among the hills covered with chestnuts and oaks, the life of an aging Spitz has developed successfully. Snow White follows his master everywhere, Kon Inien. And he adores her. However, this does not prevent him from raising dogs for meat on his farm south-east of Seoul. The animals trapped in steel cages all their lives feed on food waste, which Inien takes from restaurants in nearby cities.

Speaking about the life of Snow White and dogs in cages, the farm owner admits: “This is how to compare heaven and hell.” Con Inien recently recently made a deal with the International Humanitarian Society (HSI). It is engaged in the protection of animal rights and is campaigning against dog farms in South Korea. The company offers financial assistance to farmers – from 2 to 60 thousand dollars, depending on the number of dogs, who refused to practice dog breeding and agreed to transfer them to shelters in the USA and other countries.

Farmers themselves are encouraged to switch to other activities, such as growing peppers or blueberries. According to representatives of the public, since last year, five such farms have been closed. Kon Inyen agreed to release 260 of his dogs just a few weeks before they were sent to the slaughterhouse. At present, it is difficult to estimate the world trade in dog meat, since the industry is almost unregulated. According to estimates by animal rights groups, every year in Asia, primarily in China and Vietnam, 30 million dogs (mostly stolen or run wild) are killed for meat.

South Korea put the cultivation of dogs on an industrial basis.

According to government data, to satisfy the country’s centuries-old appetite for dog meat, more than 17 thousand farms annually breed 2 million dogs. Visitors to a warehouse-like complex of cells are immersed in a stunning cacophony. Huskies, rottweilers, golden retrievers and dogs of other breeds bark and beat their paws on metal rods. Former fighting dogs of Tosa lie idly. Some muzzles are badly damaged. Under the cells accumulate feces, creating an unbearable stench.

With the summer season approaching, when “dog meat” is in special demand, merchants come to the farms to select and buy animals. At current prices, a 30-pound dog costs $ 250. Animals are transported to slaughterhouses in crowded cages, where they can barely move (some are choking along the way).

From the slaughterhouse, wholesalers distribute carcasses to underground dog restaurants, where visitors – many of the elderly – enjoy a dish of vegetables, spices and shredded dog meat.

“Dogs are raised and supplied like some kind of cabbage,” says Kon Yingen.

A traditional Korean dog dish is called “sinthang”, or “healthy soup.” He gained special popularity when the country was in need, and there was not enough meat for everyone. Koreans are very proud of their culinary history. Even those who avoid dog meat in everyday life are angry with foreigners who criticize traditions; in their turn, the use of snails seems unthinkable, and forced feeding of ducks for the sake of foie gras – cruel.

But with the increasing well-being of Koreans, tastes and attitudes toward dogs change. Keeping pets is becoming increasingly common. The popularity of television programs about pet care and rescue stray dogs. During the April parliamentary elections, one small party voted for animal rights. Increasingly, South Koreans, especially the younger generation, are finding the idea of ​​eating canine as an abominable one.

“Grandpa puts my poodle on his knees and says:” The size is suitable for a bowl of ground. ” This, of course, is a joke, but as soon as he says so, I grab my poodle from him, ”says the 14-year-old Korean woman.

Together with her mother, they came to the pet store in Seoul. Animal rights groups are hoping that a campaign to free dogs will raise public awareness of the plight of animals ahead of the 2018 Winter Olympics in South Korea. At this time, the country will be most attentive to its global image. 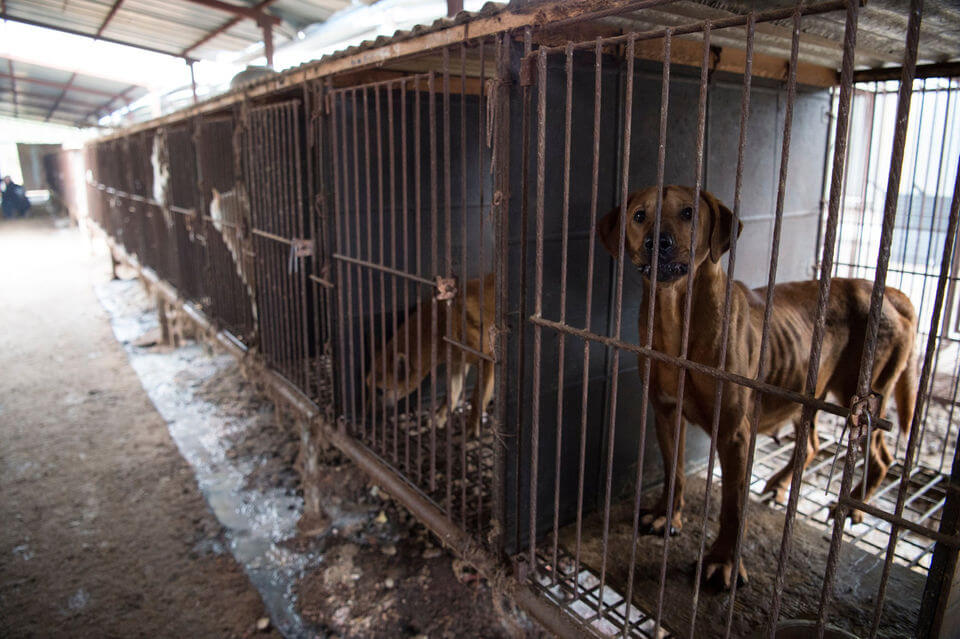 “Misconceptions related to the breeding of dogs for the sake of meat are widespread in society. The myth that such dogs differ from “normal” causes social indifference to their suffering. Our experience on farms shows that there are dogs of all sorts of breeds, including purebreds, popular as pets. ”

Farm owner Kon Inyen moved to the countryside after his musical cafe in Seoul went bankrupt in the 1990s. He was going to breed special purpose animals, like guide dogs. However, overproduction and falling prices in the market forced him to start selling dogs for meat. Ten years ago it became his main occupation.

He says: “I am not proud of what I am doing. But I do not think that this should be ashamed. No country should be criticized for its traditions. ”

Andrew Plumbly, a member of the International Humanitarian Society, disagrees with him: “Culture is never an excuse for cruelty.” They recently met and found a common language. Kon Yingen does not see a long-term future for his craft. Surveys show that most Koreans prefer chicken, beef or pork during the bokknala, when food is traditionally consumed, which is believed to help with the heat of the summer.
Now the farm owner is going to try growing mushrooms. Looking at dogs in cages vaccinated and awaiting departure, he said:

“I am not ashamed of my way of earning a living, but I am not proud of it either. Nobody would be engaged in raising dogs if they could avoid it. ”