A new campaign video ‘Tickling is Torture’ has been launched by the charity International Animal Rescu. The video of a slow loris raising its arms as it is tickled by its owner has been shared on YouTube more than five million times.

But campaigners are now urging people to avoid sharing or liking the clip because slow lorises cannot bear to be tickled and are raising their arms to activate their defensive venom glands.

A new campaign video ‘Tickling is Torture’ has been launched by the charity International Animal Rescue which is calling on people to stop the viral hit spreading any further.

The trend in keeping slow lorises as pets has been steadily growing. Pop star Rihanna recently posted a selfie of herself holding one while Lady Gaga had planned to use one of the animals in a music video until she was bitten by the terrified creature.

Phily Kennington, of International Animal Rescue, who is leading the campaign says: “People were unaware of the cruelty involved in the trade in slow lorises and have been appalled to learn how much they suffer.

“Apart from the cruelty caused by capturing them from the wild and clipping their teeth, keeping these shy little primates in captivity is inherently cruel.

“Slow lorises travel long distances at night in their hunt for food. They feed on crickets and other live insects, as well as birds’ eggs, fruit and the sap of certain trees. YouTube videos show pet lorises eating rice balls and other unsuitable food, so it’s no surprise that most of them are malnourished and suffering from serious health problems.

“Our campaign tells people the truth: slow lorises shouldn’t be kept as pets, treated like playthings and tickled.”

The big brown eyes and soft fur of the slow loris make it look cute and cuddly in the eyes of a public. 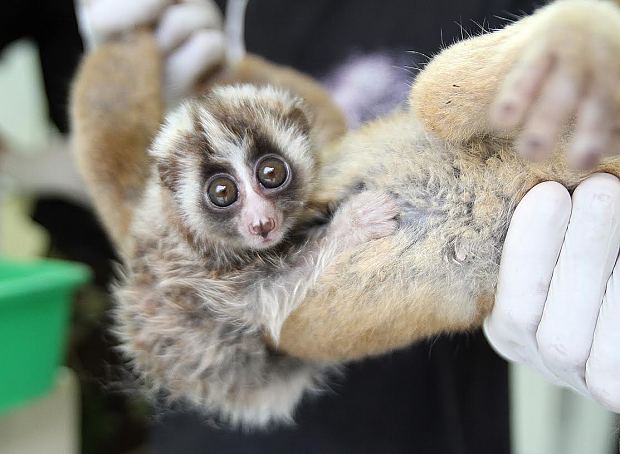 But when a slow loris is tickled it raises its arms above its head, not because it is enjoying it but in an attempt to defend itself by accessing a venomous gland on the inside of its elbow.

Given the chance – and if its teeth are still intact – it would give the person doing the tickling a serious bite, say campaigners.

Slow lorises are poached from the rainforest and taken to the heat and bright light of the pet markets in Indonesia to be sold. 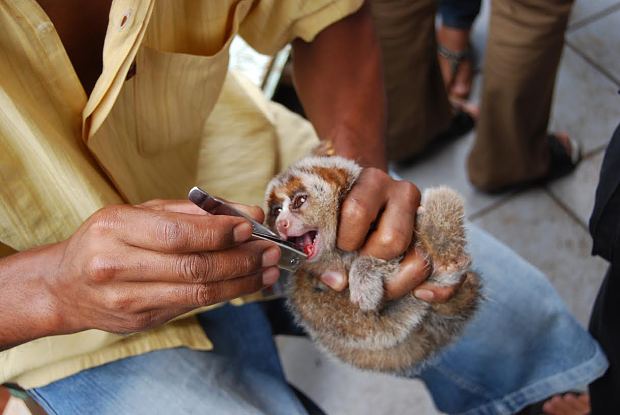 In order to make them easier to handle their teeth are clipped off with pliers or clippers, often resulting in infection and death.
With loris populations now listed as Vulnerable by the World Conservation Union and the Javan slow loris listed as Critically Endangered, campaigners say the pet trade causes terrible suffering, it also poses a serious threat to the survival of the species as a whole.